WE CAN ONLY ASSUME ANY BBB REVIEWS THEY HAVE CAME FROM MANIPULATION OF CLIENTS AND FIGHTING THE TRUE REVIEWS POSTED. The worst moving experience ever. Not only were we told our moving time was from 11am-1pm, but that that was all the time they had for us. When they were not here by noon, we called to find out if they were lost or to see if we had not given them enough info on where we were, but were told that they were finishing a move right then in the 77003 zip code (12 mins from where I live) and then they would be headed to our home we decided to continue waiting on them. We then received a call at 1:24 that they were going to be here in 30 mins and so we continued waiting for another full hour before they arrived. Once they did, they had us sign all the paperwork and the rate was $9/hour higher than what was quoted ($80/hour was the original quote). They also made a big deal about charging us if we delayed them for any reason and given the position we were now in (having waited for 3.5 hours past the scheduled time, missing a charity event for St. Jude and also just a little ready to be out of here and done), gave my husband attitude when he asked about them doing anything for their delay of us and that he was already starting with what he would say as a review. (He shouldnt have said that...) Regardless, my husband initialed the document and the mover "started the clock" and went to move his truck, but walked back in about 7 mins later (into our time!) and was aggressive with me in asking where my husband had gone and that if we were already going to be giving a bad review then "they might as well not move us and just go back to his office". I told him that my husband was moving our cars to make room for them and he could find him out back. He then said the same thing to my husband and that if he was going to give them a bad review (which really would have only said they were late at that point and something their attitude and professionalism could have overcome or even provided an excuse for us to not say anything negative) that they werent going to move us. We had already been waiting all day, missed our event and trying to just get this over with. My husband said that we really had no choice and to just get the things moved and another 6 mins into our time, he went back out to pull the truck around. By the time that he got to the back, I decided that I couldnt imagine paying someone who was trying to bully us into a good review of them or not posting the TRUTH about how they had been late and with no apology or any other real notice. My husband was planning on trying to move us himself anyway and he was just doing this to make it easier for me and less stressful...I told him I would move all of it myself at this point after our experience with a company so un-professional. I also agree with the review that they looked like felons, but was not at all going to judge them until he was rude to us and aggressive. He also assured us they would fight any BBB review that was posted---just proves that they bully people into providing positive responses. To have 5 reviews on Google and 3 of the 5 show a single star and 2 of the 5 show five stars...just shows that they have tried to bully and manipulate others as well...or just posting positive things themselves. Hate that we let them ruin a beautiful day outside by wasting our time and that my poor husband had to deal with them because of me.

1. The "packages" on the website are listed with fewer boxes than you will ever use. You are then charged for the extra boxes. We packed into random boxes we had (diaper boxes, etc.), which they said would cost us $3/box to move. When I replied that I would just get bigger boxes to put the smaller boxes into to save money, they said it was a total volume charge, which increased the cost by $300. 2. They charged for having to park around the corner from the apartment complex. If you cannot have a large trailer park directly outside your residence, you will get charged. 3. Even if your apartment has a nearby elevator, you will be charged for being a few floors up. 4. There is a 5% charge for using a credit card. Really? We ran by the bank and got cash instead. 5. One box of vases were broken, and the metal handle on the nightstand was scraped. Of course, they claimed it couldnt have been them and said they would send somebody out to repair it. We havent heard from anybody, and they didnt leave a contact number. Overall, the moving wasnt bad; they were efficient and safe. However, just be prepared to pay for three times the quote amount and fight every single extra charge that they try to stick you with! Oh, and be sure to use big boxes!

Since posting an unhappy review earlier this week, which included a chatty mover, furniture damage, inactive behavior, and foul language, I have been contacted by David from 1st Class Moving. In my previous review I pointed out that David was courteous, and able to give me a great quote. I can once again state that David was nothing but courteous and understanding. Through extensive communication David was able to take my confusion and frustration and explain in-detail the logistics of moving, the time frame that could be expected with our kind of move and the typical break that the movers get in between loading and unloading. David assured me that the individuals in question have since been reprimanded for any wrongful or careless behavior and he even offered to assist us with furniture repair. My knowledge that everything has been handled and with such swiftness on the owners part changes my two stars to a very impressed five. Having someone take the time and initiative to walk me through my grievances shows me how much pride they have in their company and that they really want the best for their customers. Faith restored, would absolutely hire again, would recommend 100%.

i found 1st class moving co on woodlands online and gave them a call for some information. I was very happy with the sevice they provided me and over all a good day. They was on time and price as quoted and after move was completed i paid with my credit card. I looked them up on city search and bbb and both was good reviewed. I did not go by a few sites like yelp do to the fact yelp has 2 or 3 stars with alot of bad reviews on themselves.WOW. I mean how can i go by reviews on a site that has bad review themselves. This is a company that i will use again and will recommend in the future. They also have a guranteed price for moving or its free. Thank you and good job.

First class, they are not! Employees look like recently released felons, along with their foul mouths. Im also missing a box. Of course I didnt realize it until after they had left so proving they took it would probably be impossible. The money was also an issue, as what I wound up paying was at least twice as much as what I was quoted. I was told they would call when they were on the way, but I didnt receive a call until after they were lost at the wrong apartment complex and I was charged from the time they left their shop. Keep looking, and get references. 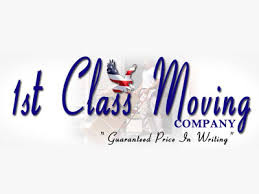