Usually there are no employees there, if the machines eat your money it takes more effort than it should to get it back. If a machine is broken, youll probably find out after you put your money in it. The owner is kind of a jerk. The is camp of homeless people nearby who are often drunk and/or high and frequently loiter on/in the laundry. The bathroom requires a pin. It took the owner two weeks to give me mine. Kind of expensive. The place is usually dirt. Most of the time the tvs and WiFi dont work. To use the WiFi you have to long in with your Facebook creditonals. Most of the customers are ghetto /trailer trash with attitude problems. They often have kids who run around playing with the carts, screaming, laying on the floors, blocking the doors, touching/taking other peoples property, or leaving their toys on the floor so you can slip and fall when you are carrying your clothes (since you cant see directly in front of you). Also the owner has multiple stores but only uses the pictures of the nicest one to represent ALL his locations.

I have been going to this place for years with no problems. I was in earlier in the week. I put $5.00 in a washing machine before I noticed it was not working. Another customer and I both noticed that some of the machines was calling for more quarters than needed. I called the number that was advertised and nobody answered. A man came in that claim to work there sometimes and his explanation made no sense. I filled out a piece of paper with a comment about what happen. I have not heard from the owner. I also have been back twice and the owner is still no where to be found. Also, the bathroom was filthy. Someone choose to urinate on the floor. If the owner does not call me back. It is doubtful I will ever go back to this business. That is too bad because it is close to my home and usually very clean.

I have been coming here now for over a year & 1/2. Ive been to laundromat closer to me for Im about 15 minutes away with traffic. But instead i come here. I dont feel a threat here, the prices are great. Its clean & ypu dont have to worry about going to the bathroom and ppl walking in. The owner is a very nice guy. Ive been to others that are dirty & half the equipment dont work. So i only come here. Pickiness i guess. I have recommended this place to many others & even told newbies they will come back. Its a great location, & its big. I saw a review about it smelling & water everywhere. Not once have I ever witnessed that & I come twice a week! I definitely give 5 stars. And will remain coming here. :)

They have an extremely clean place. The prices are great! They even have money they put aside to help people do laundry that cant afford it. They are some of the nicest, most sympathizing, good christian people that Ive ever had the honor of meeting.Look around this world, you dont see this everyday, or any day for that matter.We are homeless right now, and hadnt had clean clothes for at least 6 months, and they were there, putting tokens in the machines and giving us the soap and dryer sheets for all who entered.They cant afford to do this everyday, so you might want to FOLLOW them on here and they put the dates and times that they help others less fortunate. GOD BLESS ALL OF THEM!!!!!!!!

The laundromat itself is surprisingly clean for the location. My poor rating is because the owner used the loud speaker to ask an employee to remove me because I "had been there a while, not moving around and probably wasnt doing laundry". I was in fact, on the final 15 minutes of drying 4 loads of towels. I had been reading. Most people dont move around a whole lot when theyre engrossed in a novel and know how much time they have left on the dryer. Being a shy person, I was mortified at being singled out and accused of wrong doing, I collected my still damp laundry and left. e they left. The employee was very polite and apologetic. novel.

This is the WORST laundromat I have ever been to. I got $20 worth of change and only $4 worth was in quarters. The rest was in $1 TOKENS. The detergent dispenser doesnt even take the tokens and one of the washers only gave me a 25 cent credit for a dollar token. And you have to call a service number to get a code for the bathroom. Then the attendant said she couldnt give me cash back for the tokens. I live out of state and was in Clearwater for vacation and I will NEVER be able to use these tokens. Id recommend trying elsewhere.

I come here all the time and its a great place. Use to come for the back row special but I work over nights now. The only thing I have problems with are the people who come to get quarters who are not doing laundry and the rift raft that comes in to charge their phones and watch tv. Also today there was an employee cleaning while her significant other was charging his phone. Was a bit unconfotable. The employee never said anything to guy who was just charging his phone.

My family and I love coming to this Laundrymat in particular for several reasons first its convenient to our home. But for the most part its clean and we feel safe no matter the time we decide to do the laundry with all the camers. I love the restroom locked and a code for it is individual to the customer....it helps to ensure cleanliness and the "no loitering". And the plaza is patrolled. Unless I move I will continue to use this place. 10 on my list :D

I came here because the reviews were excellent, but I got here and it was nearly impossible to connect to the wifi, I put a $20 bill into the change machine and it gave me tokens. No where on the change machine did it indicate that I would get tokens instead of quarters. The bathroom requires a code, and I was unable to get one. We tried to get a hold of someone, but no one answered the phone. Limited seating. One TV. Would not recommend to anyone

Having a Allergen to Fabric Softener makes it hard but well maintained, like the new Dryers installed recently, would like to see the washers maybe scrubbed down in the dispensers on the top of the machine twice a month to get rid of the gunk but that is nit picking

I have been using this site for over two months now. I also have 3 of my friends now using this location. It is always clean and the machines WORK!!! Only thing is I wish the access to bathrooms was easier. I still cant get a code to get in. Maybe soon.

I had a wonderful experience it was very clean and affordable this is the first time that I been in a laundry mat that has a game room, snack machine,and a Flat screen T.V. to occupy your time while you do laundry will definely be back again. thanks

No hot water but can still choose hot and wash your clothes with no water, employee hangs up on me when I call to complain. Also it usually smells like crap and theres water all over the floor. Zero stars in reality! Never going there again. 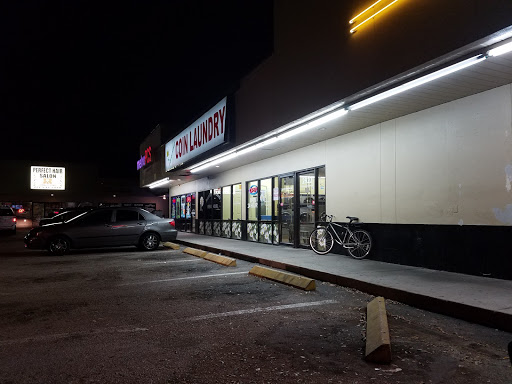 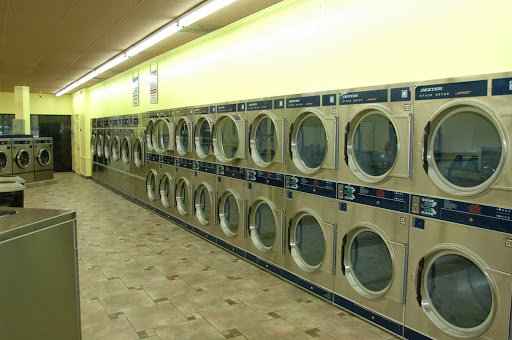 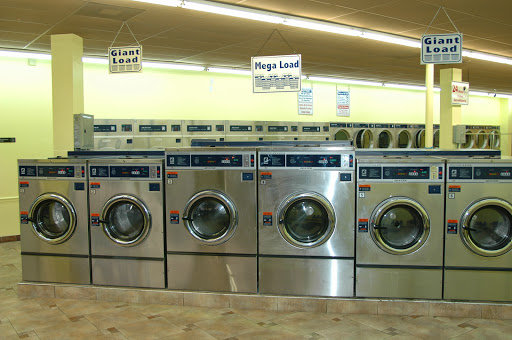 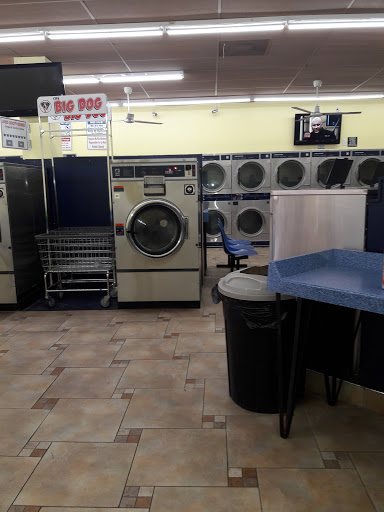 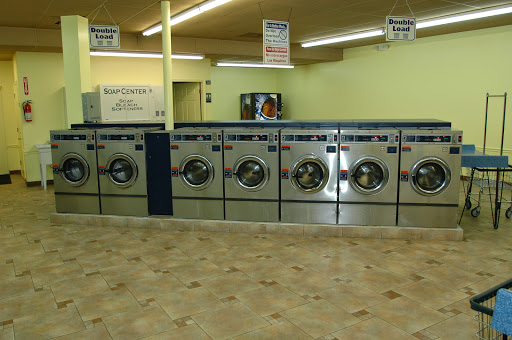 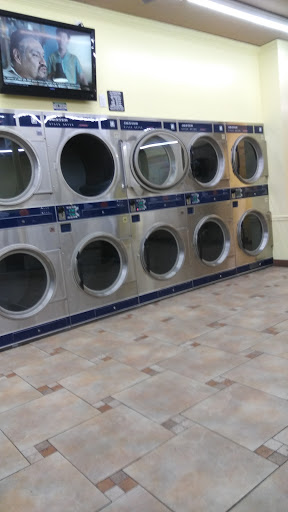 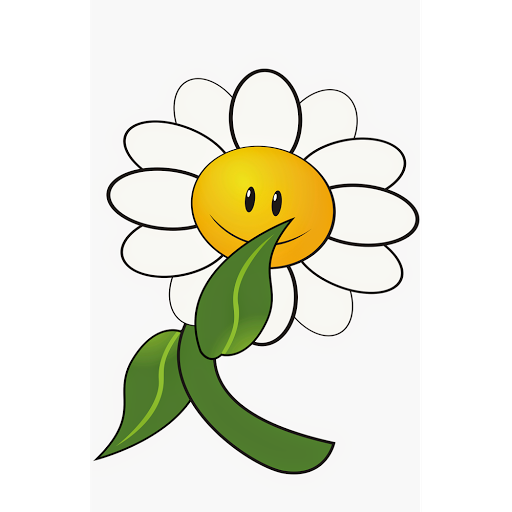 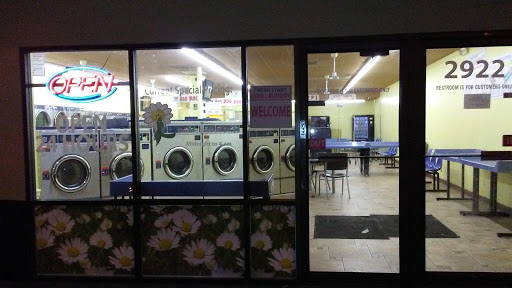 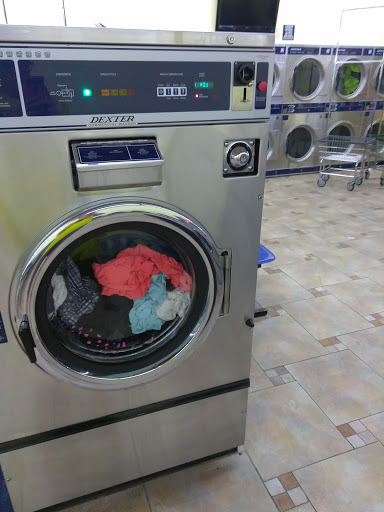 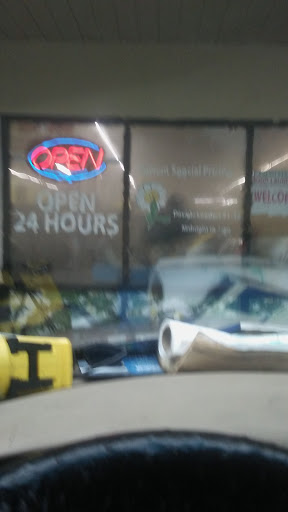 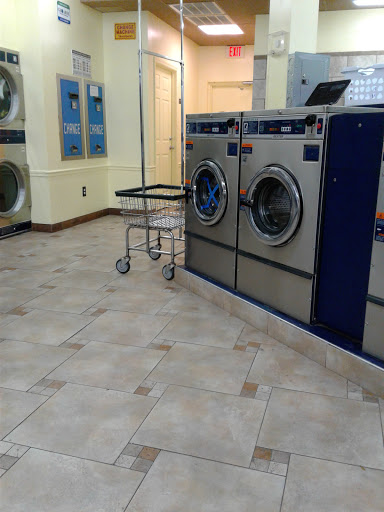 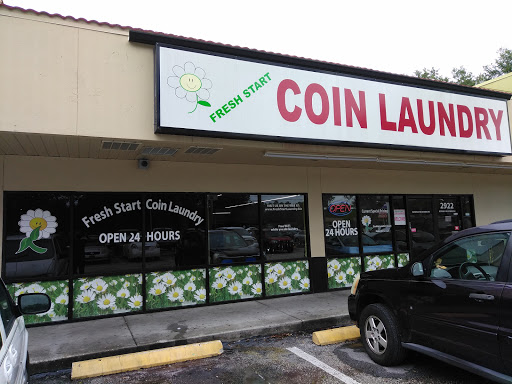 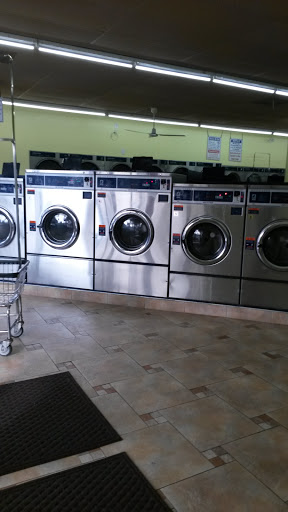 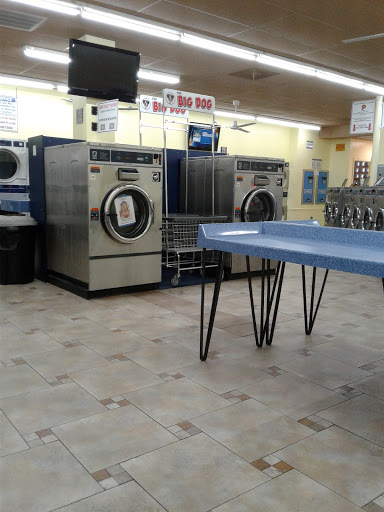 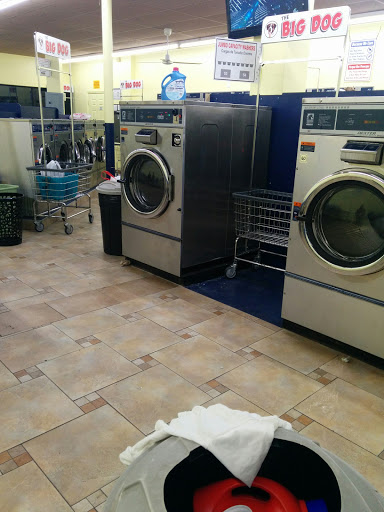