Had my girlfriends car there Saturday. They put the wrong brake pads on the car, argued that we did not need calipers when the front calipers were leaking and the rear calipers were seized, when doing the oil change they didnt notice or comment on the Gasoline leak under the hood and now the abs and trac off lites are on. They were asked to replace a window regulator and came back saying they had to do the motor also because it was bad. I had removed the motor and it was in the back seat, after they were told that they said they had to replace the motor also for warantee reasons. This place is a joke. They also charged 4xs the cost on the window parts and 3xs the cost on the brake parts. I will be filing a formal complaint and possibly contacting the states attorney. DO NOT GO TO THIS PLACE.

Wont go back ever! Walked in and walked out! Guy at the computer was rude! Asked what I needed told him an oil change rudely asked when I was looking to do it I replied now told me there was a 3-4 hr wait for an oil change. The longest Ive ever been told for a oil change. All as he never took his eye off his computer.

John is the most polite man Ive come across in auto repair. Ive never had more than an oil change done here, so cant really speak to the quality of the work on more complicated jobs, but I can say Ive never had a negative expirience. Price seems below others in the area, which also helps. Ill keep going back.

Have been coming here for years now - they seem to be the only trustworthy mechanic shop around, even after moving to Mokena, I still drive out to Crestwood anytime my car needs work done.. went to some place in Frankfort close to home.. never again, sticking with this shop.. always.

This Midas is run by a great guy. John is committed to his customers, and his results speak for themselves. The guys in the shop are top notch, and there is very little turnover. Ive been going to this shop for about 7 years.

I recently got my oil changed here, they were polite and fast. They have coffee and tea, cushioned chairs, and a widescreen tv. I got the coupon price even though I didnt have a coupon. Great work, Ill be back!

Ive never had a bad experience here. They are always courteous yet direct with me, and they do good work. Definitely recommend.

You tell them whats wrong they check it out and dont charge you for it maybe on complicated stuff they may.

All of the guys here are fantastic. I wouldnt trust my car anywhere else. 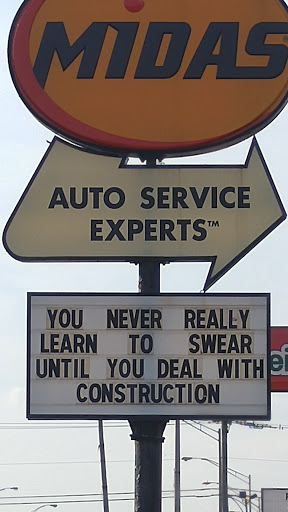