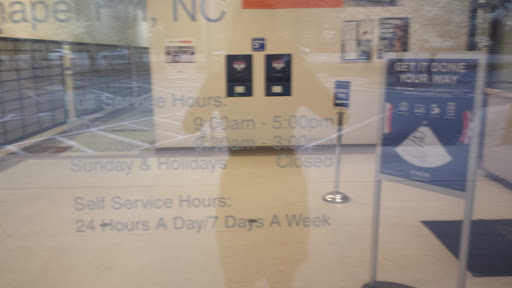 This post office is staffed by some of the nastiest, brain-dead individuals Ive ever had the pleasure of meeting. Though all three I interacted with were disrespectful and appallingly ignorant human beings, the worst among them was a woman named Kim. Though she initially came off as just rude, dismissive, and spiteful, after some consideration, I think her job has just made her dead inside. Though I wont go into detail on here, they all seemed dead-set on ignoring any and all logic, facts, or reason--even if it meant being willfully ignorant of their own policies. They made me wait over an hour with my package, jerking me around with whether I could send it or not, ignoring all my documentation of their own policies, showing me outdated (from 2002) charts, and then, finally, when Kim was begrudgingly letting me add a new label on to ship it, she said she got "a text from her boss" saying it couldnt be done. No other real reasons given. Though I had absolutely every right to ship my package, I was already shaken and didnt want to clog the overcrowded, disgustingly understaffed little place for the unfortunate people in line (some of whom were openly defending me--completely unprompted). So I left without so much as an apology from the soulless shell of a human that is "Kim". She did, however, provide the name of her boss...who was, of course, not there, and decided it was appropriate just to TEXT a negative response when there was no way she could know via text what my situation was. I understand if shed told me to come back tomorrow or asked to call me, but the negligence from this so-called boss is shocking. Her name is Chris Palumbo, by the way---not that shell even get a slap on the wrist for her likely countless instances of incompetence, but I feel she deserves to be shamed in at least some minuscule way. If theres any way you can avoid this place, please do. I know most post offices are terrible, but Im certain this one takes the cake. From what I witnessed, they were horrible even to people shipping simple things. I know itd probably make them happy to hear that Ill never ever patronize them again simply due to the fact that they seem to be the type whod rather do anything other than their jobs.

In case one does not want to read my rant I give a solution first followed by my issue. The bottom line, the government should close a whole lot of post offices, start a no junk mail list (that is done for phone calls, the do not call program) and use the money to reduce our deficit. The post office seems to be incompetent when it comes to forwarding mail. We moved from Nottingham Drive Chapel Hill to another address in Chapel Hill. It appeared we were possibly not getting our mail. My wife phone the post office and was told that the Notthingham Drive postal man would call her back. That did not happen. Fast forward 2 weeks, we are SURE they are not forwarding some of important 1st class mail. Had two checks returned to sender as undeliverable, daughter’s school information as well as a number of business documents. WITH THIS TYPE OF SERVICE, WHO NEEDS THEM. OUR TAXES ARE NOT BEING WELL SPENT. In addition, we pay nearly a half dollar to send one small envelope. IT APPEARS THE "NATIONAL OFFICE" RECENTLY TOOK OVER MAIL FORWARDING, WHICH now adds additional time to get mail to the right address. The supervisor at the post office indicated that our forwarding documents are correct but there was an error on their part and that was why we were only getting 1st class mail forwarded sometimes. The bulk/junk mail seems to come to us just fine! The same crap that is put in our Nottingham mailbox appears at our new address. Excellent delivery process for mail NOBODY WANTS BUT A PRETTY PATHETIC DELIVERY PROCESS FOR EXPENSIVE 1ST CLASS MAIL.

Whatever shortcomings some of the employees at this branch may have (reading other reviews here) I have found there are always some who do their best to provide good service. While I rarely visit this branch in person - it is the office for my zip code but there is a closer office to my house - whenever I have had a problem with my mail they have always been responsive and helpful. Just today I had a problem with a package not being picked up - I had completed the package pickup request online (a great service!!!) but the carrier did not pick up the package. I called the office and the woman said she would have it picked up right away. She called the carrier and he came within 5 minutes to get the package. On another occasion I had requested a package pickup that the carrier missed and that evening the Postmaster showed up at my house in his suit and said he had found an incomplete order for package pickup when he was closing the office so he stopped by on his way home to get it and took it in the next morning. There will always be good and bad employees in any organization but I am grateful for the good ones at this branch.

Ive been having issues receiving packages. A while ago I had gone into this post office and had the mail in the office checked over and it turned out it hadnt been sent and they gave it to me. This time I was met with unwarranted rudeness as I politely asked if they could simply check to see if any packages werent sent. When trying to explain why, I was interrupted and talked down to, again very rudely. The employee said snarkily that they send all the mail they get and I had to gently push to get her to listen to me. She finally complied. Dont get me wrong i hate it when customers are mean to employees and falsely claim theyre rude, i strive to be as polite and nice as possible when talking to employees at any business. Thats why I was so taken aback by unprovoked hostility. I get that customers can be a pain, but if I havent done anything wrong to you and am in fact trying my hardest to be nice I dont deserve to be treated with such disrespect.

Typical government bureaucracy where customer service is the last thing on their mind. Why would they care about customer service? They have a government granted monopoly on First Class Mail. It’s not like we have a choice to take our business elsewhere. They can treat customers like dirt as much as they want and we just have to take it. Not sure why I’m even writing this review. The only recourse I have is to patronize a different USPS location. I got scolded for stacking packages that I was dropping off on the floor in front of the counter. “You can’t leave em boxes on the floor. Them need to go on the counter. We gonna be here all night with em like that.” The counter she was referring to already had packages, boxes, and tubs of letters stacked on it almost reaching the ceiling, but somehow I’m supposed to stack my packages there also. Terrible, just terrible.

Wow, this place gets a bad reviews and half of them are not even comments on the postal office itself but the system as a whole. In any case, the parking lot is smaller than it should be, and sometimes the lines are a hair long during peak business hours, but so far I havent felt anything to crazy. Theres been a hair of downsizing, which has lead to a hair longer wait, but so far the people at the front counter try to get everyone out as quick as possible. Cant really blame them for one party cutting funding to USPS and what normally slows the system down are people 1. not pre-filing out their mailing information and 2. not understanding what they are doing there. Do wish they had a dedicated window/ self-service area for drop-offs. Itd make life so much easier for people like me who pre-package and pre-pay. Probably speed up the lines quite a bit as well. 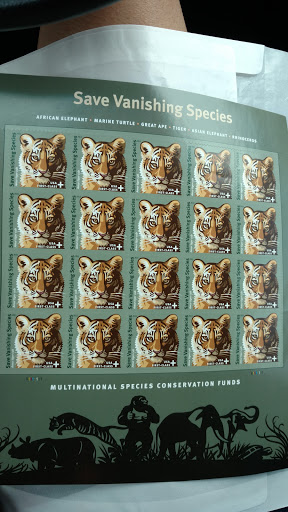