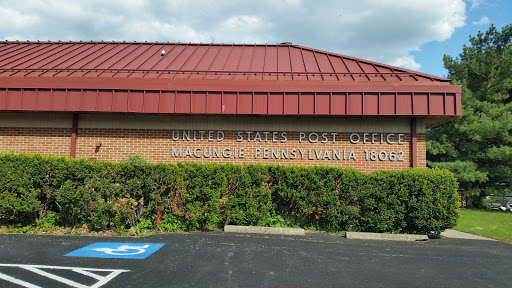 Worst postal service ever!! Not only do I work in Macungie but I also live here. The postal worker that delivers mail to my home is always late and we cannot get mail sometimes until after 5pm, even on weekends! We never know when to check our mailbox! I recently purchased something through Cabelas and was told it was shipped through USPS so they did not have a tracking number for me. I was told to contact my local post office and they should be able to tell me if it went out for delivery ... the lady who I spoke with was so rude to me! She yelled at me for not having a tracking number and acted like it was my fault that they were so disorganized at the Post Office. She even told me that I was "SOL" because "thousands of packages come through their doors at this time of year that she doesnt have the time to find my little package!" UM RUDE! Youre a government employee maybe you should show some class?!?!? Whenever I have to travel to the actual Post Office for my work I have to deal with ridiculously long lines and ONE person doing all the work while others stand around chatting! When you finally reach the counter you have to deal with rude customer service! They never stock their envelopes so you always have to wait in line to get the one you need and then go fill it out and stand in line AGAIN! Recently I was there and they had packages stacked high on every register except for the ONE register that the employee handling the long line was at. Talk about unorganized! From now on I am dealing with another office.

In 8.5 years of having our mail delivered we NEVER experienced an issue until a month ago. We have a string latch on the box and Howard, the post master, said that his people are not responsible to close the door with the latch string and that his postal worker was reprimanded. He did leave a notice to change the mailbox. I responded by saying that this was NEVER an issue before and NEVER received a response back from him. Well, today, he presented himself and the post office well. He stated that I should buy a new mail box or pick it up because he doesnt want anyone to close the box with a string. I asked how difficult was it to wrap it around and he laughed. What pisses me off is how much does it take for someone to do a two-second task...this goes to show you that the quality or state of being kind is evaporating. Im also wondering whos keeping who employed and whos the customer.

Post Master is a blasted idiot. He throws around postal terminology to impress but he really doesnt understand the USPS policies. For example, I went to send a 3.5X5 letter and he said I should be charged a machine surcharge because it was too small. He asked for an additional 21 cents. When I looked up the policy on the USPS website, I learned that there is such thing as a surcharge BUT the package size must be further calculated to get some ratio....Long story short, my package fell well within the ratio - and I SHOULD NOT HAVE BEEN charge an additional 21 cents. The money isnt the issue. Its how this individual is spouting off postage policies but doesnt quite understand them himself. He did tell me to come in for a refund. Again, the 21 cents is not my issue - its him and his lack of knowledge and customer service.

Agree with others.. no one seems to care. One time I was running late and as I walked up to the the inner glass door the attendant locked the door while I was standing right next to it. Didnt say anything like "sorry were closed" just turned the key then turned their back on me and walked away. I stood there with my mouth open and just left thinking if The US postal system had real competition theyd be out of business in under a year. Very sad. Also love when there is a long line and you see like three other people milling about doing nothing... like they are thinking "sorry its not my job" what ever happened to teamwork and respect for your work.

I wish zero stars was an option. When I ship something there priority (specifically so I can track it) and it is always out for delivery or not delivered there is a problem. When I call the business to see if there was a reason the mailman/woman was unable to deliver, they are left dumbfounded because they have been receiving mail on all the days it says the letter was undeliverable. I left Macungie many years ago yet that place still plagues me.

Incredibly disconnected staff, nobody cares or makes an effort. Drive as far as you need to use a different branch. The glowing review above was CLEARLY posted by someone affiliated with them, I have NEVER seen a happy customer leave there, the lines are long and the staff dont even TRY to keep the lines moving. They are stuck there from 9-5 or whatever their hours are, and they arent going to rush. AVOID.

I have lived all over, and NEVER encountered ANYTHING like this post office. Third world countries have better service. I spend up to two hours a WEEK tracking bills never recieved, delivering mail to my neighbors that was put in my box, and paying fed ex to deliver anything important because the US Postal Service in Macungie simply is not capable of doing the job they are funded to do *correctly*.

Extremely inept sorters of P.O. Box mail, going on for at least the 6 years I have lived here. It improved BRIEFLY after I initiated a campaign and tracked their errors, but now its BAD again! I recently received a confidential lab result that was placed in my PO Box rather than the correct PO Box for the Macungie Medical Center on Main St., although the correct PO Box number was on the envelope.

this place sucks they loose all of our packages, they smash and shove packages in to a tiny parcel locker with in return causes damage to the item, they never take responsibility for loosing the item they just tell me to ask my neighbors if they have received my packages this place deserves a no star rating when we call to ask were our item is they have the phone off the hook

The boss at this location is a royal "female dog"--for lack of a better term. She uses sarcasm to insult her customers, workers, and everyone else she can use it on. I spent close to $50 today on her business, and I would never be treated disrespectfully by UPS or FedEx. Why should the government owned/run USPS have worse service.

I have been waiting for a package to be delivered for almost a week AFTER it arrived at this post office. I have been calling and, though I clearly have tracking information which shows that it was delivered there, they told me that they dont have it and HUNG UP ON ME! I am furious! Half of the workers need to be fired.

This place is run by an ogre. No wonder the reveiws are so bad. She is totally disconnected from reality. I dont know how anyone in that office can work for her. Not to mention her indiscretions!!! Borrowing money from the post office is against the law (I Think).