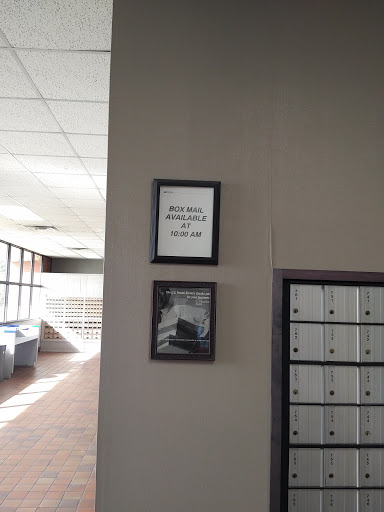 There are two specific workers at this post office who have been HORRIBLE to me and others in the past. One day I was going to get $5000 in money orders. I had the cash to pay for it and was in a hurry. When I got to the counter the lady said because I wanted $5K in money orders Id have to fill out government paperwork stating why. Again, I was in a hurry so I said, "well whats the limit because I dont have time to fill out paperwork." She said, "the limit is $3000 but I cant do only the limit for you now." I said, "why?" She said, "because you wanted $5000 and now youre telling me $3000." Basically, she was accusing me of criminal activity because I had changed my mind due to being in a hurry. So to prove to her that I was no criminal I just went ahead and filled out the stupid paperwork, got my money orders, and left. There have been other times this same person has been rude, uncaring, and unfriendly. Secondly, there is another clerk there that did this one day: Elderly man walks up with 3 or 4 small packages that had been wrapped with some paper tape. The scene goes like this: "Sir, you cant ship these packages with paper tape on them." Elderly man replies,"Oh, I didnt know that." She replies, "yep this type of tape is unacceptable and will peel off during transit. See..watch this." Then she breaks off part of his tape in essence opening his box. She says, "youll have to take these back home and buy some better tape and do them over and then bring them back." The little old man didnt know any different so he was about to meander back home and I stopped him and let him know that they sold tape right there at the post office if he wanted to buy some to prevent him from driving all the way back home. He said, "oh they do...well thats great thank you for telling me. Ill buy some and it will save me a trip." Now, I ask, why didnt the clerk tell him they sold tape? Also, why didnt the clerk help out an elderly man who didnt know any better? They have tape behind their counters too and it wouldnt have taken 2 minutes for her to get the tape and help put a couple of strips around his boxes. No, instead she was willing to let him drive ALL THE WAY HOME....go to the store to buy new tape and then cause him to have him drive all the way back up there to see her smug expression when mailing the package the second time around! If they have a policy of not giving tape then fine...whatever.....at least tell the man that you SELL the tape 5 feet away on the wall! Im sick to death of people having absolutely NO people skills when it comes to customer service. Look, if life is so bad and you hate dealing with people every day then QUIT YOUR JOB AND GO DO SOMETHING ELSE! If you dont like taking care of customers then LEAVE. Go away and go get a cubicle job where you dont have to deal with people. If you hate people and dont like waiting on them every day then thats fine by me but STOP getting customer service jobs. Let the people that LOVE to help and wait on people do the job. Craaaaaaaaaaaaaap! Now, I would be unfair if I didnt tell of the good workers that I see at the post office. Unfortunately, both of the bad ones are ladies which makes the ladies look bad. There is one nice lady that Ive seen there. Ive not been fortunate enough to be able to get her that often but she seems nice enough when Ive watched her interact with some of the customers. Secondly, there is a really wonderul guy there who ( If he reads this I hope he forgives me ) but hes a bit balding and I think I may have noticed an earring in his ear. Hes a WONDERFUL person and has always been very friendly. If you see him...hope he gets to help you. Maybe these other gals will read this review and maybe change their ways. Who knows. I think people get in the "rut" of the every day routine and begin to forget that PEOPLE MATTER! So when you get a little old person in there who could use a little help....next time HELP HIM!

First of all, please provide some pens on the counter for customers. I did not bring in a pen with me, so I asked the post office lady to borrow one. Later on, I forgot about the pen thing and left it on the counter, then at least 3 customers used this pen. When I returned to the same lady, she gave me a mean look and said, "wheres the pen?" I said it was used by someone, grabbed the pen from the counter and gave it to her. She said," well, sometimes people just walk off with the pen" Thats true. But hey, I think most of the times when people walk off with the post office pens because they forget about it, not the intention of stealing. So did I, I left there cause I saw some people need to use it like me. The pen is cheap okay, who the hell care about stealing a pen that costs couple cents? Second, please provide clear information to save our time. I needed two priority international and one domestic envelopes. However, the priority envelopes they provide in the corners indicated that they were for domestic use only. When I asked the lady for the international envelopes, she gave me the look as if I was stupid, saying "you could use the same envelopes for the international one." Oh well, I was confused okay? And Im sure that I was not the only one that encounter such problems. Why dont they at least stick a note on the wall to indicate such information to save both of our times? Third, please dont be impatient and gave the attitude as if the customers are stupid. Im not stupid, I just didnt know much about the post office thing as you guys. I was just asking whether there was a tracking number for the priority domestic envelope. She looked at me in silent, her face was saying "gosh, what else do you want?!" Then I told her that I need a signature confirmation, she asked me twice, "Are you sure?" Yes I was sure, I knew what I was doing, Mrs Postoffice-know-it-all lady. Gosh. I wish I would not need to deal with them anymore. No wonder there is online usps service, it is set up for customers who cant put up with such bad attitude customer service people.

How do these people keep their jobs?!!!Update: the last 2 weeks our entire street has to get our mail from each other I guess the mail carrier is dyslexic or illiterate. But, the latest is priceless...I purchased an item from overseas. Waited all day for delivery because it must be signed for, and it was delivered to Amazon fullfillment center in another zip code, 25 minutes away. The person that signed for it was: c hhmmxxgghhyylltty. Really? I called church street that NEVER answers their phone but a friendly guy at memorial rd usps told me where it was delivered called the 1-800# and have me a case # and promised to call me in 24 hours. Yeah, right 5 business days later never heard from them or got the package. The day before thanksgiving they left a book hanging out and closed the lid with a rubber band in torrential rains. Obviously it was ruined. Just bummed I have to give 1 star. Our postal carrier sucks!! They cram packages in our mailbox that stick out 10-12" so anyone could just drive by and grab them or they have been left there during a rainstorm. But, the laziest carrier doesnt deliver at all. Sitting next to my front door (that is 3/4 glass), looking out directly on my front porch. Havent moved because my foot is broken. I get a message from Amazon at 1:50 that they attempted to deliver at 1:10 and no one was home. (this happens twice a week since we moved here 16 months ago) Because some loser couldnt walk 2 car lengths up the driveway, and then it miraculously showed up on Monday. I saw him sleeping in the publix parking lot in the middle of the day on Saturday. Guess his job was cutting into his sleep time. But, now I know why I dont get my packages. Good job usps, civil servants at their finest. Boycott usps!!!