Prior to bringing my vehicle to Aamco I was already alerted that my starter was going bad. So I called Aamco to get the starter done with them because I saw they had a high customer rating online. When I called to schedule the appointment they reassured me that I should accept their free inspection before getting the starter changed. So I agreed and my wife dropped of the car. When dropped off they said it should take about 45 minutes for the results. Well several hours went by and we still didnt hear back from them so my wife decided to call and I decided to stop by. When I got there the guy had a long list of problems which equaled about $2000. This car is a great car and fairly new and has never had any type of problems since I brought it. All of a sudden, besides the starter, its 3 other things that needs to be changed immediately with the starter or it will damage the car more. So me already knowing how these places do, I said ok I will take my car back home and set up an appointment when I make my decision. Of course, the typical mechanic story, my car would not start so I couldnt leave their facility forcing me to rather leave it there or get the work done with them. Either way they have me cornered. I spoke with the owner, GM, and 3 mechanics who all gave me different stories. The main guy claimed I needed $2000 of work done, 2 of the mechanics said its only the starter, 1 mechanic said they didnt even start the car since it was dropped off. The others said it was started several times to test drive it and search for other problems. The main guy claims it never started since we dropped it off. Lies every angle. I was really surprised and disappointed that a major auto company like Aamco was even capable of still pulling this old trick off. I dont know if they did it because business is slowing up for them or because of my race or maybe even because of my age, but i know they did some type of damage to my car that they are not trying to take the responsibility for. Please. Take my word. This is not the place you want to go. There is a Mavis and an Exxon right up the highway that I would recommend. Never ever again will I, any of my family, or friends take our business here again.

My wife has a 2005 Rav4 that was purchased new, and she will drive it until the wheels are square. It has been a great vehicle and although I try to maintain it, I have never changed the transmission fluid since we purchased it. There is about 125,000 miles on it and figured before we start having issues, it was time to change it. In calling for an appointment Joe answered all my questions and upon arriving for my appointment, I met Pete who went over what they would do before starting the work. They took it out for a test drive and upon returning , determined all was Ok with the transmission, but was a little sluggish in gear changes. Before changing the fluid they would also go through the car to see if everything else was good. The only thing they found was that my coolant was a little low, and went ahead with the trans fluid change. I decided to wait instead of going home. While there I was impressed with how clean the shop was, the restrooms were spotless! There was also plenty of coffee. Several hours later, my car was ready as it was pulled up the technician passed me and was courteous. The overall atmosphere, friendliness, and communication was excellent. I drove the car home and I noticed a big difference in how it shifted. It went into the gear changes much faster and the engine didnt seem to strain when I accelerated. Most of all my wife was happy, she even commented how much better it appeared to drive. As others stated, there was no pushy sales pitch. You are told your options, recommendations and it is up to you to make the final decision based on their assessment. It is hard to find a good place to have your car repaired, but this team has it all together. They make you feel at home. I would go back again with my other vehicle in the near future and recommend going to AAMCO.

On my way to visit my son at college with my entire family while driving on the NJ Turnpike my 2011 Chevy Suburban started to smoke badly , I pulled over to the side to see what was going on . It looked like Orange milk coming from the plastic tank where Anti Freeze is supposed to be , so I tried to make it to the next exit but , within a few thousand feet my truck stopped moving completely. My wife googled for a transmission repair shop & called the AAMCO of East Brunswick location and they arranged a Tow truck for us . We were towed to the location & the Owner Peter was a life saver . He had his service manager check out our truck within an hour & explained that our radiator failed which allowed the anti freeze to mix into the transmission causing the failure to our truck . What was great was , he gave us more than one option of repairing our truck with several levels of warranties & costs allowing us to choose the best option for our personal & financial needs which was such a pleasant change from any other automotive repair experience I have ever experienced.Not only was our truck fixed & back on the road the next afternoon but , he provided us with transportation within a half hour allowing us to to continue our trip to our son . I would like to personally thank Peter & his entire staff for such unbelievable service at a very reasonable cost by more importantly, getting us to our son & comforting all of us in a very stressful day . It is so nice to know that there are still people who value their customers & treat them as if they were family. Thank you so so much Peter !!!

Peter at Aamco is trustworthy. I believe him when he tells me whats wrong with my car and what I need you fix it. I also know he will find ways to save me money. Aamco East Brunswick is the only place I will take my car. Last January my transmission went and I was quite nervous and afraid. I didnt know what to do, I thought this was the end of my car because I wouldnt be able to afford it. A friend recommended Peter at Aamaco and after speaking with him I felt so much better. Peter explained each and gave me options along the way. He answered all of my questions, even some that I didnt have. I never felt as if I was being rushed or if my concerns were not being addressed. When I was concerned about money, he got me, a one year interest free loan. Now Aamco East Brunswick is the only place I bring my car.

My Fiancé and I brought our Chevy suburban here. Peter and the entire shop gave us the best service ever. Gave us multiple options on fixing our transmission and advised us on the best one. I have never been so satisfied with a mechanic in my life! After fixing truck they had an issue with the 4wd they ran the truck over a million and one times before giving it back to us, making sure everything was perfect. They fixed everything and even told us to bring the truck back in, after 10 days or so to make sure everything was still running smoothly! I do not have enough words to tell you how amazing this shop is. I wouldnt hesitate to tell anyone to bring their vehicle in to them. 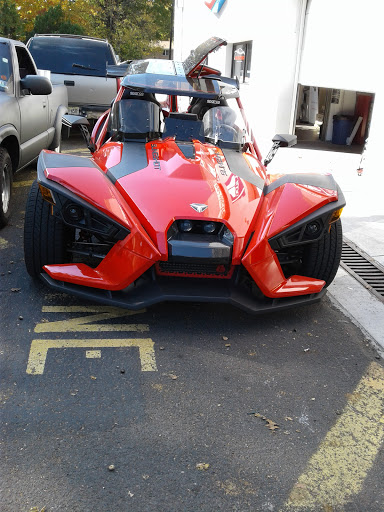